I went in for my 38-week appointment on Thursday, May 13 and everything seemed pretty routine. We tooked my stats, saw the baby via ultrasound and checked to see if I was dilating (I wasn’t). I had every expectation of going a full 40 weeks – if not a little later since everyone says that your first is usually late. My OB suggested that I eat spicy foods, drink raspberry leaf tea or get a foot massage if I wanted to jumpstart my labor. I told her I was trying to keep this baby inside of me for as long as possible because I wasn’t ready!

The next morning, I wrapped up a virtual meeting for work. Five minutes after that call ended, I started spotting, which had never happened during my pregnancy. It wasn’t a lot, but I had a hunch that it was the beginning of the end of my pregnancy. That moment threw me into overdrive – I had so much to do over the next week and a half, and now was determined to do as much of it as possible over the next few hours: tidy up the nursery, finish packing our hospital bag, and pick up a few more onesies because we didn’t have enough!

The spotting continued throughout the day, but was just light enough to not be overly worried. On Friday night, we had friends coming over to pick up some furniture and decided to go to a local Thai restaurant for dinner. With my OB’s advice in mind, I asked for the mildest level of spice possible which ended up still being spicy by non-Thai standards!

That night, I was in and out of sleep every hour with what initially felt like period cramps that grew more intense by the hour. I didn’t have Braxton-Hicks during my pregnancy, so I wasn’t quite sure what a contraction would feel like. But everyone assured me that if I was having them, I would know. By 4:00 AM, I was pretty sure what I was feeling were contractions, so I started timing the frequency and length of each one.

When I say I’m a procrastinator, I mean I tend to save major tasks and projects until the very last possible moment – including finishing my labor and delivery class! Restless at 5:00 AM, I cracked open my laptop and watched the rest of an online birthing class, which included sections on pain management and active labor. Talk about having info fresh in the mind!

By 7:00 AM on Saturday, my contractions were occurring about every 5-7 minutes for around 20 seconds each. Being the compulsive people pleaser that I am, I waited until 7:30 AM before calling my doctor’s after hours number because it felt “too early” for the weekend (of course, I felt comfortable doing this based on how my body felt – do not wait if you feel that your situation is more urgent!).

After chatting with my OB, she said to head to the hospital. At this point, my contractions were stopping in my tracks and the only thing I could do was pause, focus and take deep, controlled breaths until the pain subsided. In between contractions, I finished packing up my hospital bag, did my eyebrows (but not the rest of my face lol)  and made myself a cup of coffee before heading out the door.

When I checked the trip time from our apartment to the hospital, Google Maps said it would take about 22 minutes from our apartment in Queens to our hospital on the Upper East Side. Not bad, I thought! And yet when we got in the car, James’ GPS said the trip time was 38 minutes. I figured there was a sudden spike in Saturday morning traffic. It wasn’t until later that I realized that James took us on a toll-free route, which added an extra 16 minutes to our commute – he’s lucky I didn’t go into labor right then and there!

When we got to the hospital around 9:00 AM, my contractions were excruciating. I had never felt pain as intense as this before. The hospital staff brought me into a screening room to check my cervix and take all of my stats – at this point I was a 4 cm dilated. My blood pressure, which had been normal before and throughout my pregnancy, had taken a sudden spike and I was pushing out quite a bit of blood during my contractions. The doctor said it could either be a normal result of my cervix opening or a placental abruption where the placenta detached from the wall of the womb early. The thought of the latter was a bit nerve-wracking, but I stayed focused on breathing through my contractions and letting the hospital staff take care of the rest.

By noon, it was time to move from the screening room into the delivery room. During the intake process, they had asked me whether I wanted an epidural, to which I replied with a resounding YES.

My birth plan had always included an epidural and the intensity of my contractions made it clear that this was the right choice for me. But that doesn’t mean I wasn’t nervous. I read about the risks (albeit low) and I’m also not a big fan of giant needles – compound that with the fact that I was being overwhelmed with a white hot, searing pain every few minutes. When it came time to set up the epidural, I was shaking. The staff made James sit down for the procedure, since “some dads get squeamish,” so all I could do was hold on to a pillow, curl my spine “like a cocktail shrimp” as the anesthesiologist inserted the needle, and breathe.

Months ago, I had mentioned on Instagram Stories that I was probably going to get an epidural. My inbox was flooded with messages all for team epidural. I think the most poignant message was, “Your baby won’t love you any less if you get one.”

Well let me tell you: I felt like a brand new woman after the epidural started to work its magic. I could still sense when I was having contractions, but the pain was gone and I felt so much calmer. At this point I was 6 cm dilated and had a bit of time to relax. We FaceTimed our family and friends to give them updates before resting a bit.

Around 1:50 PM, my OB came back and informed me that I was fully dilated. It was go time! All of a sudden, everything and everyone went into action. Lights were on, nurses got into position and James was at my side. This moment felt so surreal – maybe it was because I had just finished watching my birthing class just hours ago. I felt both nervously unprepared and confidently ready at the same time.

My OB instructed me to push for ten seconds, three times during each contraction. Because of the epidural, it was difficult for me to gauge how hard I was pushing. It felt more like I was holding my breath and crunching my abs, but my doctor assured me that we were making progress. After the second contraction, she suggested using a vacuum device to help pull the baby the rest of the way out and I think the thought of that was all I needed to push me across the finish line (pun intended).

During my third contraction – after only five minutes of active labor – baby was out! I can’t believe how quickly it happened. Theo entered the world crying, and I followed suit. I had no idea what kind of emotions would hit me, but after nearly 39 weeks of pregnancy and one hell of a morning, I just started balling. I think it took James by surprise, but I assured him they were tears of joy – lots of them!

I spent quite a bit of my pregnancy worrying about this big day. What would delivery feel like? How much pain would I be in? How long would it last? My nerves were mostly from the fear of the unknown, but I’ll tell you now: the hours leading up to his birth absolutely pale in comparison to the moment I finally got to meet this tiny person that I carried inside of me for so long. Our baby boy. The little love of our lives: Theo James. 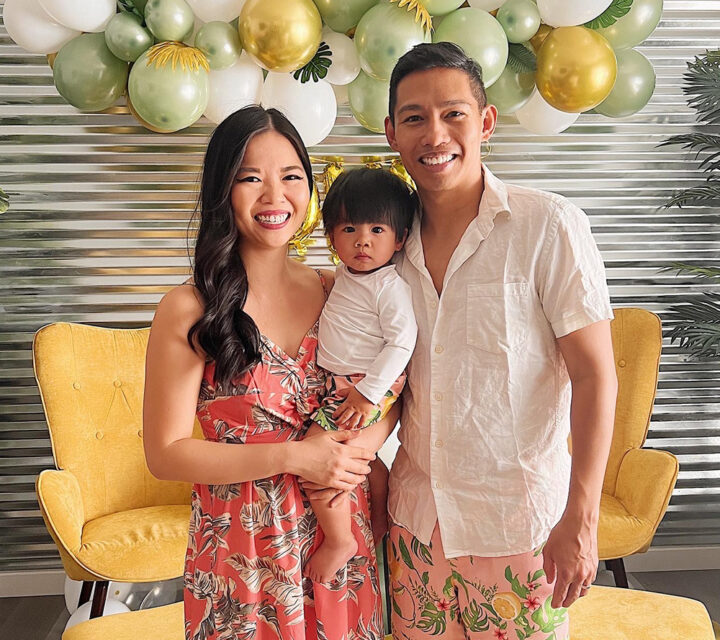