James and I are celebrating 15 years together today!

It’s hard to believe that we’ve been in each other’s lives for fifteen years. That’s nearly half of our lives! You may have seen James pop up here and there on my Instagram, but most of you know him as the man behind the cam. Today, I thought I’d celebrate this special milestone by sharing the story of how we met and started dating.

Cliff notes version: I met James because he lived in the same dorm as a friend from my high school that I had a crush on.

It was the first month of freshman year. I remember walking on campus with the friend and bumping into James, who was on his way to a night class. If I had to bet $100, I’d say James was probably wearing a Ralph Lauren polo in size XL and a puka shell necklace with super spiked hair.

If there’s such a thing as love at first sight, this was the complete opposite.

We introduced ourselves and went our separate ways. I literally thought to myself: “Man, this guy is really Asian.” (Side note: I went through this weird anti-Asian phase, which I think many Asian Americans do – but that’s another story for another time!)

I would see James whenever I hung out with my high school friend in his dorm. Obviously, things didn’t work out with that friend, but James was always there when I needed some good company and a good laugh. Over the course of our first semester of college, James became a really good friend – probably my best friend in college at that point. I mean friend in the most platonic sense because I literally friend-zoned him for months!

James once invited himself over to my dorm room to bring me a burned copy of Nelly’s Sweat & Suit album. Yes, a burned CD – totally dating ourselves here. My roommate was over at her boyfriend’s, so James and I ended up talking and watching movies the entire night. He decided to sleep over (versus walking the five minutes it would take to get back to his dorm…), so we slept in the bottom bunk of my twin-sized beds … head-to-toe.

We spent every weekend together after that, just watching movies and ordering Domino’s on his college meal plan. Eventually, we started sleeping in the same direction, but spent most nights just talking until the sun came up.

That Thanksgiving, we went back to our respective hometowns and it was during those few days apart that I realized I liked him more than just a friend. Fast forward to the weekend before final exams and it was probably another Domino’s-fueled movie night in my dorm room. The only difference was, on December 11, 2004, we kissed. And the rest, as they say, is history!

TL;DR – James and I became really close friends before we became boyfriend/girlfriend. And sometimes I wonder whether we would have ever connected with each other on a campus of 37,000 students if it wasn’t for the fact that he lived a few doors down from my high school crush. Life has a funny way of bringing people together, and I feel so lucky that it decided to bring James into mine. 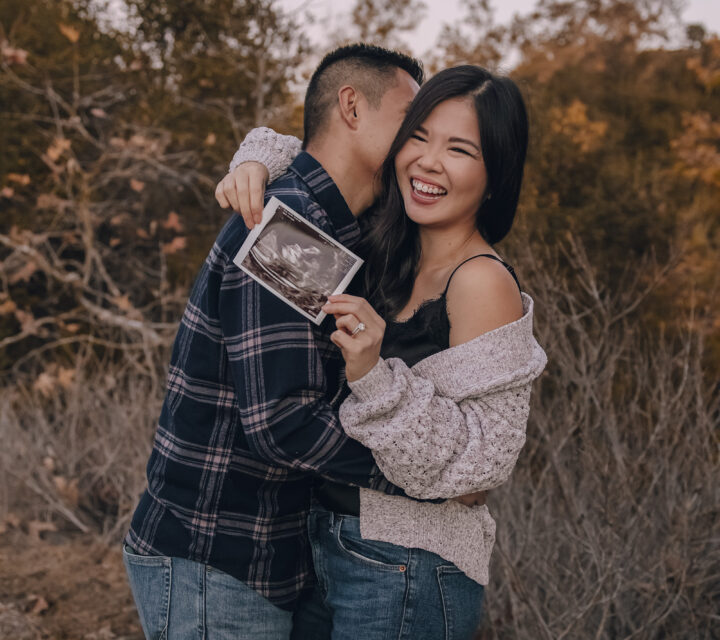 When did we feel ready to start a family?